Differentiation in a Montessori Classroom

I’d like to introduce you to two of my students:

"Look! It's isosceles!"
4-year-old Thea* excitedly points to the isosceles triangle she created with wood blocks.
When Thea joined our classroom last year as a 3-year-old, she spoke no conversational English, but she could identify most print letters and numbers by name. She had an exceptional ability to absorb and remember new vocabulary and concepts. As she gradually developed conversational English, she rapidly mastered identifying the cursive lowercase letters and letter sounds, as well as phonograms (sh, oy, ee), etc.
As a 4-year-old, she worked with more advanced language materials and began to sound out phonetic words. Likewise enchanted with numbers, she loves to write the numerals we've introduced on chalkboard, exclaiming, "Look, I make 1,000!" She loves blocks and shapes, so while working with the constructive triangles, I started introducing some of the triangle vocabulary, and within two days, she could identify equilateral, isosceles, and scalene triangles.

"Joey*, what color is your shirt today?"
"Red!"
"Yes, it's red! Let's go find some other things that are red."
Many children know their basic colors by age 3, but Joey struggled. I knew that he could see the difference between the colors - he consistently could match the pairs of red, yellow and blue in Color Box 1. He was familiar that "red" "yellow" and "blue" were words associated with colors, but he really struggled to connect the name with the concept.

By age 4, when the color names still were a struggle, and the typical level of reinforcement and practice wasn't sufficient, we began a new morning ritual. After our usual good mornings, I would comment, "Joey, you have on a red shirt today.... what color is your shirt?" (They wear red polo shirts as their uniform every day). Giving him the vocabulary before asking him to reproduce it helped him feel successful and confident - it was a fun, playful interaction. Eventually, I started just asking him the color of his shirt without stating it first, and then asking him to name the color of other red things in the room. Once he had mastered that red things are "red," that anchor seemed to help him more quickly master other color names.

Differentiation – adapting instruction to meet the needs of the individual students in the class – is an imperative for effective teaching. While differentiation is one of the greatest challenges for teachers to implement in a traditional single-age classroom, it is one of the greatest assets of the Montessori model. Our classrooms are inherently differentiated because each child is moving through the curriculum at their own pace. 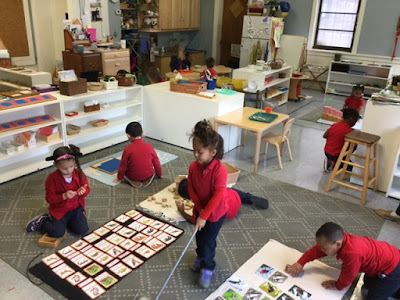 We see the wide range of skill levels in a classroom as an asset, and intentionally have mixed age classrooms (most Montessori schools group children in 3 year age spans - 3-6yr olds, 6-9, 9-12). Because the children are simultaneously working with different materials in all curriculum areas, there is little direct comparison between peers. I know that every child has the capacity to learn and grow, and I love how the Montessori approach helps me to give each child an individualized classroom experience.

*Names changed
Posted by Cheryl at 10:14 PM No comments:

Science Fair - What's inside a seed?

Our class shared a favorite seed exploration activity at the school's science fair this week.


"Do you know what these are?" 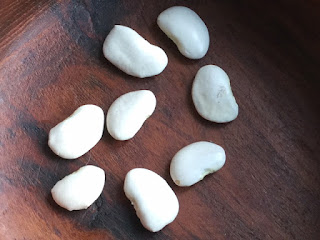 "Rocks?" was a frequent guess from students.
We discuss that they do look like rocks... and they're hard like a rock... but these are something else! They're lima beans, and that means they are seeds.

"We want to see if we can find what is hiding inside the seed. Would you like to see? "(Always a unanimous "yes!")

It's difficult to open a hard, dry seed, so we soaked them in water for a day (and added some food coloring to make them easier to see)

Look how much they changed! 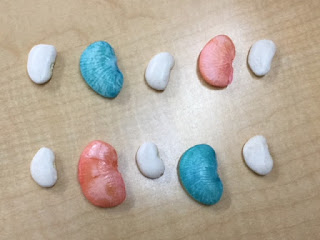 Soaking loosens the tough seed coat. Peel it off gently, starting at the side that is curved out 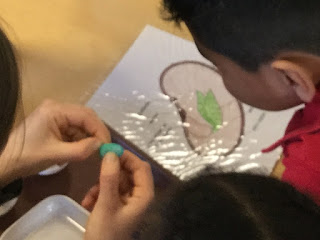 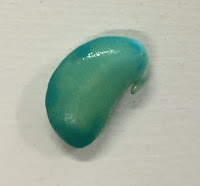 Look! Do you see something poking out?!

Now gently separate the two halves... and there is the baby plant! The thicker part becomes the root and you can see the tiny little leaves 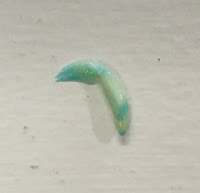 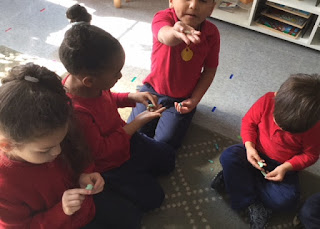 In the classroom, we first explore the seeds as a group time activity. 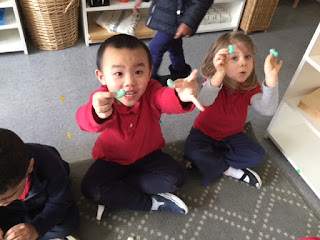 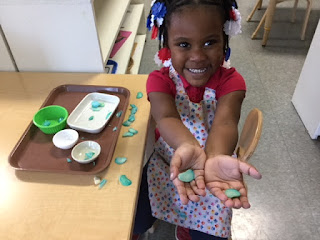 Then we have seed dissection available as an independent work choice on the botany shelf.
Now we are waiting for spring so we can start our garden...

Posted by Cheryl at 9:34 PM No comments:

I love the depth and breadth of the Montessori language curriculum! 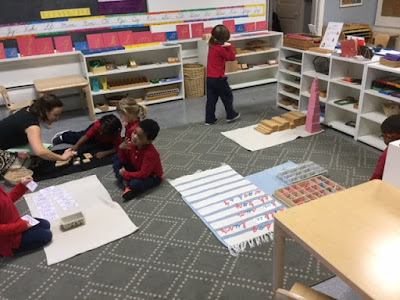 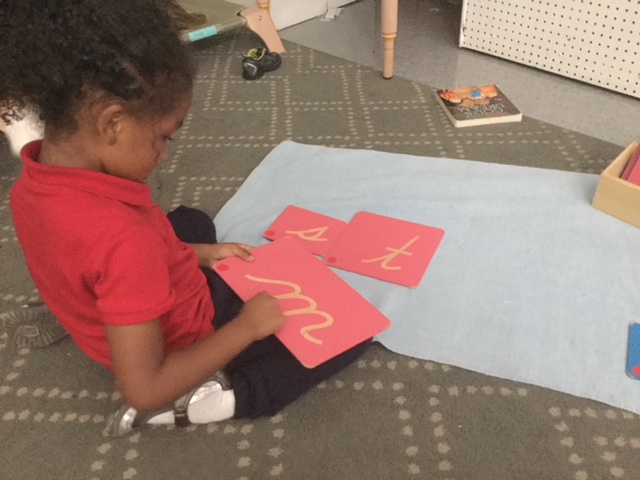 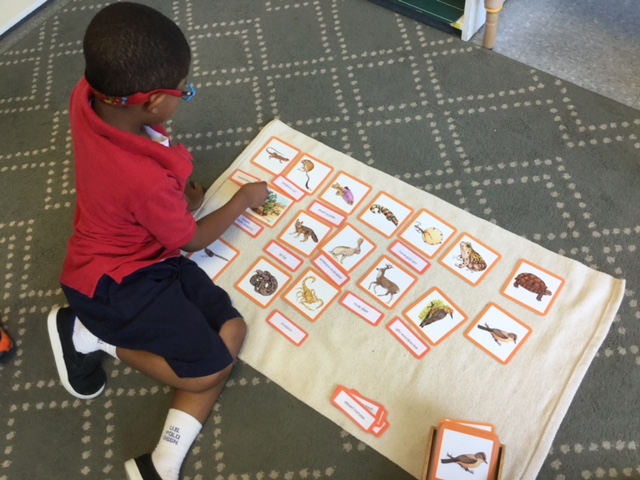 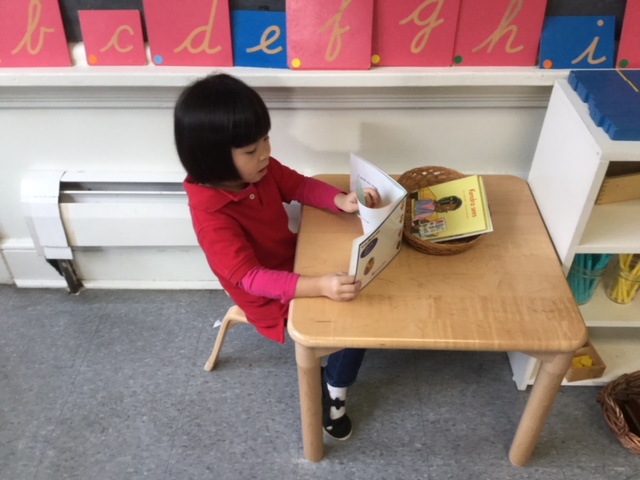 Here's a quick overview of how our children learn & grow through the 4 layers of language learning:
spoken language --> phonemic awareness --> writing --> reading 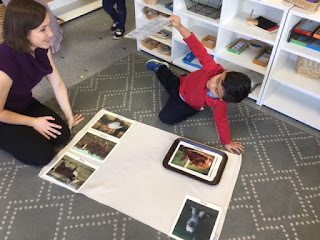 The daily classroom learning environment is steeped with opportunities to enrich spoken language, including:

Phonemic awareness is the ability to isolate and identify the different sounds (phonemes) that make up words. Examples: c-a-t and sh-ee-p - both those words are made up of 3 phonemes.
We begin with sound games to practice identifying the beginning sounds of words (e.g. "mommy" starts with 'mmmm').


Once a child can identify most of the sounds in the alphabet, they are ready to start connecting those sounds to the letter symbol, which we introduce with sandpaper letters

In keeping with the Montessori principle of "isolation of difficulty," we work on each of these aspects separately, bringing them together when the child has mastered both components.

Cognitive Writing
Many children have a grasp of letter sounds before they have the strength and coordination to write well with a pencil. The movable alphabet lets children practice the mental task of sounding out words. 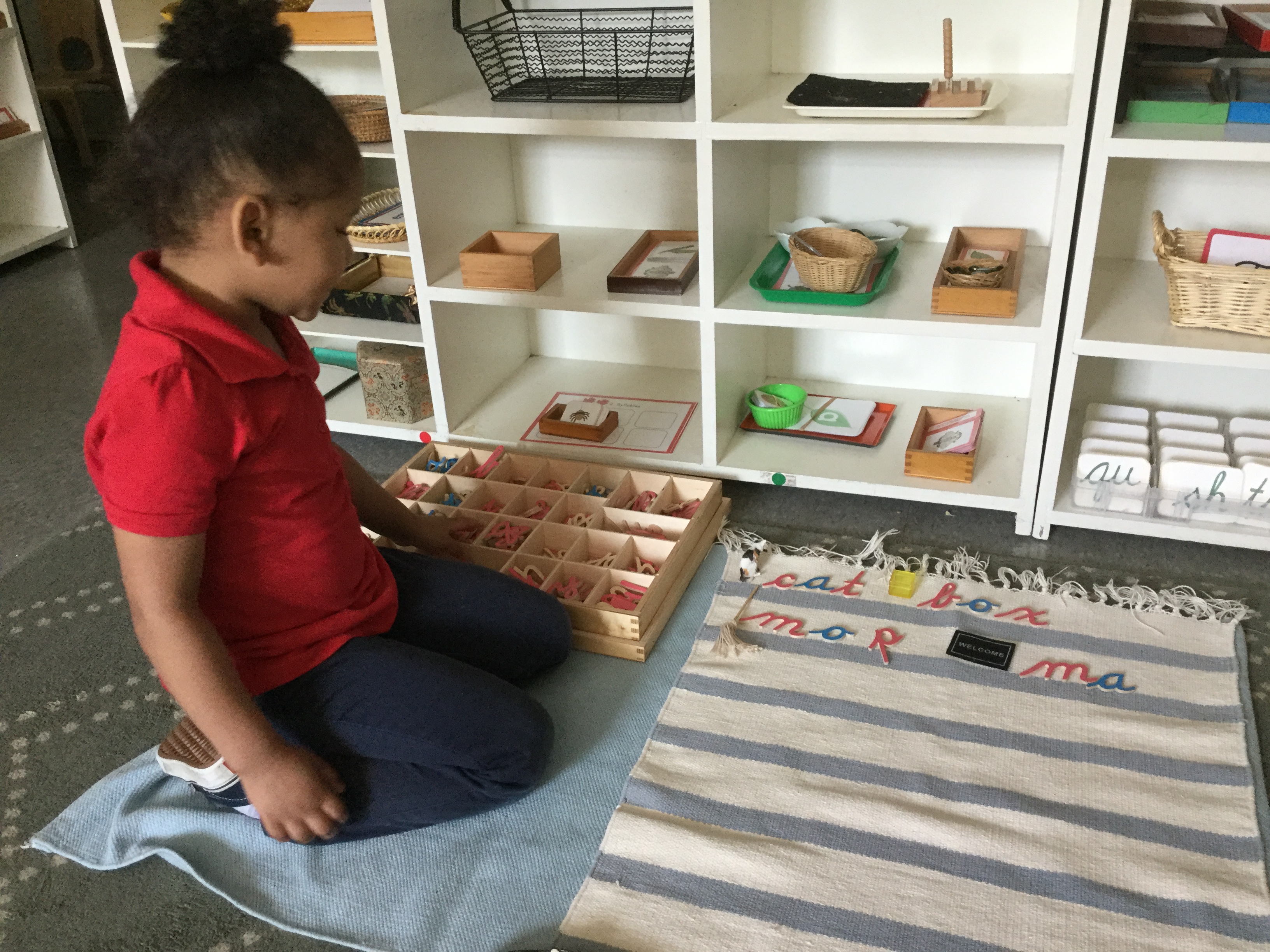 Mechanical Writing
We simultaneously prepare children for the physical task of writing both indirectly (through materials that build the strength and coordination needed to write), and directly through a variety of handwriting practice materials 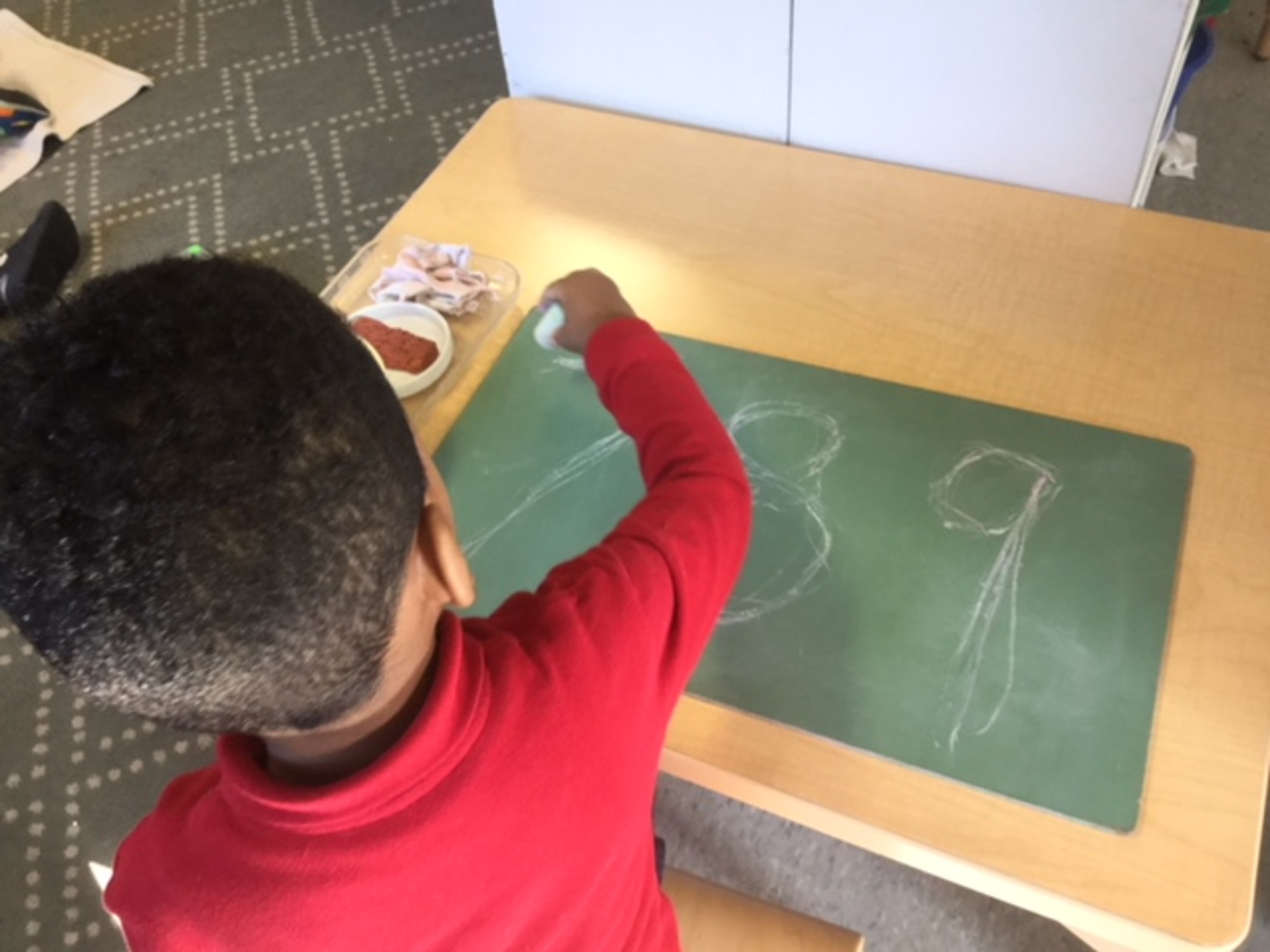 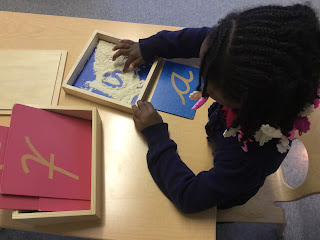 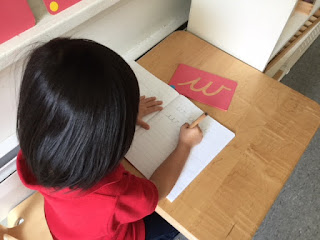 Phonetic Reading
We begin with phonetic reading - words that can be sounded out. First simple 3 letter words, then longer words that include blends (two consonants together - st, bl-, pl-, -nd) and phonograms (sh, ee, oy. ...)


Sight Words
Once a child has a strong foundation in phonetic reading, we start to introduce all the crazy words in English that don't follow the rules! "Sight words" (or "puzzle words") are frequently used words that must be memorized (learned by sight), because they usually don't follow the phonetic rules of our language. 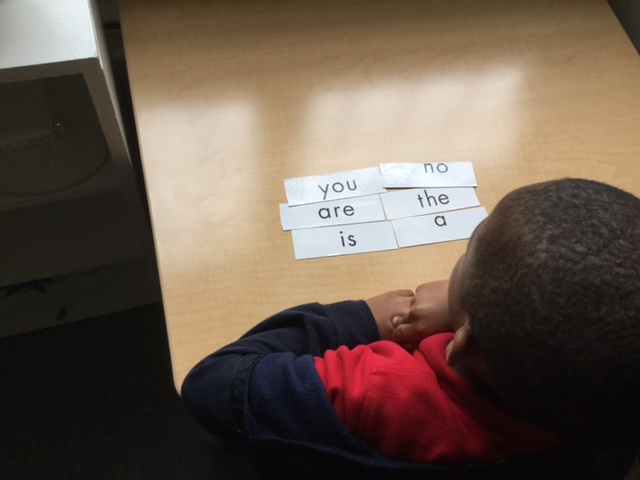 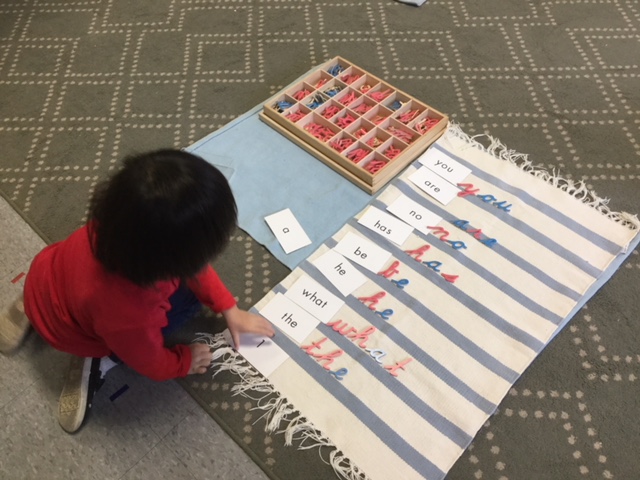 If you want more details about the Montessori approach to Language development, I recommend Julia Volkman's thorough description of the Montessori Language Program on the Maitri Learning website.
Posted by Cheryl at 9:24 PM No comments:

What’s so special about
Montessori Preschool? 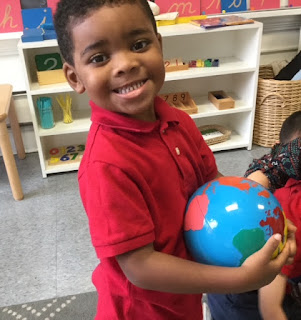 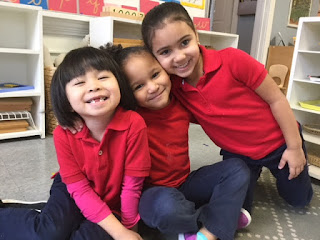 Learn...
about the Montessori Program at Sacred Heart School, a South Camden school for 3-year-olds thru 8th grade
(FREE for 3-5 year olds with NJ Childcare Subsidy)

Ask questions...
of Montessori teachers & parents who chose Montessori education for their kids

See more information for prospective parents, or email cheryl@montessorisprouts.com
Posted by Cheryl at 1:48 PM No comments:

Give your child a strong foundation for success with 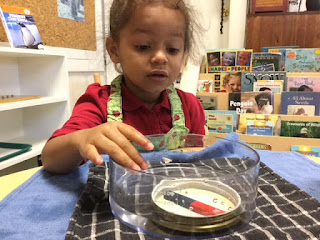 Cost: FREE for families that qualify for the NJ child care subsidy program
(for parents working or in school) 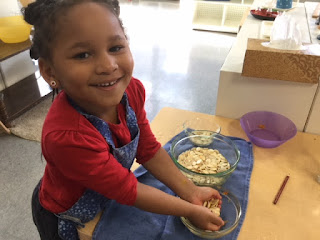 What is Montessori education?

- respect for each child as a unique, capable, & intelligent individual

- mixed ages in a family-like atmosphere 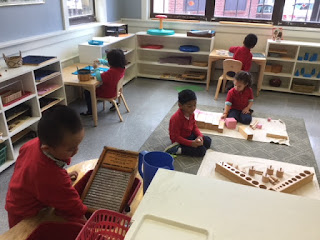 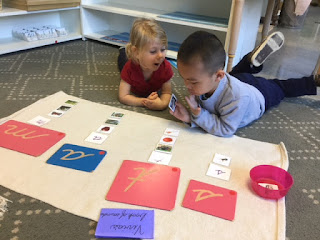 
Research on Benefits of Montessori Education